I can positively say that the rich history and diverse art form of motion pictures intrigues me, so I approach film scoring as both a fan and an artisan.  In fact, I thrive on the challenge of deciphering peoples lives and relating memorable, entertaining stories about unique events or meaningful relationships.  Human value inspires my artistic vision and mosaicist style, and the act of composing is especially satisfying.

In terms of performance, my scoring technique centers on three essential criteria: dramatic sensibility, creative design and service excellence.  I accomplish results in each of these areas by interpreting the action, conceiving extra-musical cues and collaborating with the production team.  Every score beckons its own style just as every composition has its own style, so I adapt to what a film dictates.  The goal is to develop relevant musical concepts that consistently support the cinematic vision while achieving project deliverables timely and within budget.

Additionally, I take pride in my craft and welcome the opportunity to contribute my skills and talents.  Since my foremost passion is composing and producing in a dramatic context, the experience of working with dynamic people in the film industry who are also passionate about their profession and who focus on delivering the highest quality in every endeavor motivates me to succeed even more.

In doing so, I not only aim to do my best, but to do what is best for the production.  Even though the occupation of composer is fairly autonomous, filmmaking is a team effort that requires a win-win, client-first attitude.  Therefore, I always strive to work as a creative member of the production team and have fun while I work.  Afterall, whats most important is to remember that the story, not the score, is the star.

Interpreting the action calls for critical listening and an understanding of how the score should support the cinematic vision.  My role as a film composer is to articulate the plotline, to complete the psychological effect of the drama on screen by providing compelling thematic material most suitable to the harmonic unity of images, dialogue and sound effects, in the end achieving the production teams vision for the script.

The score should play a supporting role as an instrument of persuasion.  It is a matter of coherent expression, since the concept should ultimately reveal the overall arch of the motion picture like a transparent narrator consistently relating plot points and character development.  Of course, a good score is not always a narrative, yet it still needs to be sensitive to the plotline in order to be of service to the story and the psychology of the characters on some level.

This is accomplished by identifying the main characters and the central role or objective of each scene and how they fit together, then considering the goal of the central plotline as the overall objective or spine of the score.  Evaluating how cues should be depicted as the plot progresses and designating musico-conceptual associations with a metamorphosis of themes and arrangements occurs next.

This is where timing notes, spotting sessions and mockups are critical, because I need to be aware of what the director wants the audience to feel and say in light of what people respond to in an emotionally predictable way.

Conceiving extra-musical ideas begins by stretching beyond formal molds to design a score concept that follows the dramatic sensibility of the picture.  The plot and cinematic style determine the layout rather than the usual stricter forms or stereotyped patterns of established music, which can be too constraining.  For this reason, a composer typically becomes freely dependent and independent of formal molds both at the same time.

Whatever form it takes, the content ordinarily retains the fundamental principles of theory, encompassing the sensuous, expressive and technical qualities of music.  The descriptive powers of music can imitate the emotions and particular circumstances of an idea or story in literal or poetic terms, although poetic imitation inherently allows for more freedom of imagination and invention.

While rhythm, melody and timing are visibly inherent to depicting the action, the focus of effective scoring falls on harmony and tone, or orchestration and instrumentation, because that is what really brings out the underlying emotion and power within each cue.  More than a simply aesthetic experience, recurring melodies and/or harmonic progressions combine with visuals, dialogue and sound effects to inform the viewer.  Sometimes plot motives are tied to a particular theme and often to a particular orchestration with an emphasis on flow and continuity.

These guides-to-feeling must be viewed as mechanisms to deliver a message from an informed perspective, an emotional as well as intelligent response set within a well-structured performance.  The conscious mind can only perceive so much data at any given time, whereas the subconscious mind can process vast amounts of input.  While the images and plot are impacting (or distracting) the audience, convincing score design targets the subconscious.

Of course, if anybody notices your work, then youve failed.  Thus, an understanding of the specific cinematic style and the target audience is necessary to appropriately catch the spirit of the drama and impact as many people as possible.  Some general considerations include settings, characterizations and viewpoints; tempo, sync points, style and instrumentation; using silence, sound effects, idiophones or score; temp track and source music; playing build up, impact or aftermath; monitoring for sonic conflicts between the music and Foley track, as well as several others.

My tenure in corporate management taught me that every project has its own set of challenges.  Hence, Im well prepared to balance the demands of multiple situations, ideas and personalities.  Im not here to learn on your time, but to provide a value-added service, to deliver the best return on your investment.  Consequently, I believe the key to achieving quality outcomes on a consistent and regular basis is combining effective communication and a clear sense of dramatic purpose with business minded direction and personal oversight.

Its important to obtain as much information and direction upfront as possible, because I am better able to fulfill the motion pictures musical needs and client service level targets by understanding the production goals and collaborating with the crew as a creative partner.  Indeed, involvement in pre-production helps streamline the conceptual planning and budgeting process, providing a head start on preparation and score design well in advance of receiving the locked picture.

When all is said and done, the resulting interpretation is naturally shaped by my own unique outlook and experience. I can generally relate to most scenarios, so once I have the concept in mind, I simply play what I feel and translate that technically to the film.  If for some reason you dont like it, then Ill write something different.

Music mirrors personality.  Comprising the innate disposition with which one was born and the influence of the time and place in which one lives, personality melds with the character, history and relationships of a period to form a particular style and method.  Since this artistic vision converges on the plot and themes of a story to shape the unique style of a composition or score, a composer must have an individual personality in order to offer any value.

The essence of my own artistic vision obviously evolves with varied interests and inclinations.  It’s kind of pleasing to reprise familiar material once in awhile, but that’s not nearly as appealing to me as dreaming up new themes or concepts.  I enjoy conceiving evocative musical worlds set within the mosaicist style of my own design, juxtaposing traditional orchestra with contemporary sonic palettes that incorporate rock, pop, avant-garde jazz, world music, modern minimalism, ambient electronica and other elements.

Artistically, the film medium offers greater means to explore and develop more versatile ideas as opposed to the spatial limitations of conventional formats.  To that extent, the creative options are more rewarding.  Plus, it gets better with time; because intrinsically there are a lot of things that one picks up and learns.  Not only composing, but also the correlation between music and pictures, balance and contrast.

As a perfectionist, I find the process intense, but fascinating, and Im always trying to improve.  I continually seek to understand humanity, to make sense out of different cultures, attitudes, motives and behaviors, as well as divergent artistic idioms.  In the end, if I leave behind any hint of noteworthy legacy, I hope it is well-designed musical concepts more than a specialized instrumental style; a vibrant mosaic of life and art that stimulates people and instills a sense of personal understanding by illuminating collective experience. 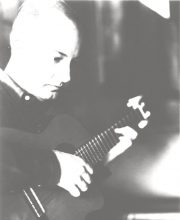