The Apollo Sessions: Vertical Leap Remastered launched 2020, showcasing ten instrumentals for fans old and new to explore before the artist embarks on the thrilling journey of recording new material.

The concept for Vertical Leap is to illuminate life experience through a contemporary acoustic-electric musical prism. The goal is to integrate opposing musical styles to achieve a harmonic and universal expression of the timeless interplay between light and dark elements which ultimately reveal divine presence within the human spirit. The radio and film repertoire has garnered acclaim by numerous critics based on the resonance of the dynamic arrangements.

While guest musicians may appear on recordings from time to time, the music retains a singular vision and inspiration that pervades from the heart and soul of studio artist, composer and producer George Mahn, III. The essence of the artist’s musical ideas derives from his search for hope and salvation within his spiritual landscape. He feels melody helps discovery and acceptance when words are not enough to express feelings. The purpose of the music is not only to entertain, but also to stimulate the mind and instill a sense of personal understanding by magnifying collective experience.

The versatile guitarist has always had a talent for crafting evocative new musical worlds. His original compositions, with their vigoroso progressions, transparent orchestrations and unforgettable melodies, explore a wide range of forms. Juxtaposing a love of fresh, innovative sonic palettes with traditional orchestra, he incorporates new age, chill, rock, pop, avant-garde jazz, world fusion, modern minimalism, ambient electronica and other elements to create a signature sound that is distinctively familiar, yet constantly evolving.

In addition to his creativity in Vertical Leap, G3 has logged production credits in the control room where he can be found working behind the console as producer, sound engineer and film composer. Whether recording and mixing other musicians or scoring to picture and creating soundtracks for film clients, he has earned recognition on a variety of projects.

G3 formed Vertical Leap in 2001 and officially released the debut album Sanctuary in 2002. The studio artist, composer and producer scored the feature movie The Promise in 2004 followed by the pilot film Matzuda in 2007. He finished a collection of instrumental pieces for A Passing Moment in 2009 and a series of original themes and scores set for the silver screen titled The Winter Palace in 2010. Music score for the short film Ribs was composed in 2012 and new instrumentals appeared on the album Reflections that same year. The Lotus feature film tapped G3 as a creative consultant in 2015. (Discography)

Exploring ideas for the next Vertical Leap musical project underscored 2021.

Studio and Live Production
Beginning in 2010, collaborations with various music creators segued into producing a wide spectrum of projects for clients and in 2013 G3 took the helm at Regogo Records where he can be found working side by side with artists as producer and sound engineer in a state-of-the-art recording and mixing facility.

Outside the control room, G3 has co-produced artist showcases and live concerts in the studio’s premier private event space with bar and lounge. He has also lead post-production and mixed the live audio recordings of these shows, shining the spotlight on great musicians and memorable performances.

Regogo Records presented its first show on April 1, 2017, with Briefcase Blues supercharging the Rhythm Backn’ the Blues concert supporting the Dallas Police Department Honor Guard and RunningTeam. These “Brothers in the Blues” returned summer of 2021 with a spirited performance for the Blues In The Night concert once again benefiting the DPD Honor Guard.

Regogo honchos created and hosted the inaugural Bob Dance Texas Blues Festival in December, 2017, honoring legendary Formula 1 and Lotus racing icon, Bob Dance, a long time friend of the studio and blues enthusiast. Featuring a stellar lineup of Texans playing Texas blues past present, and future, the event emerged as an annual benefit concert, accepting donations for the DPD Honor Guard, The Jim Clark Trust and DFW Rescue Me, as well as collecting coats for homeless veterans of Dallas.

Although cancelled in 2020 due to the pandemic, Regogo welcomed back loyal fans and friends for the Bob Dance Sidebar Blues Party in 2021 and everyone is excited for a jolly good extravaganza to celebrate the full Festival redux!

2022 kicked off in the studio with recording and mixing current projects for familiar faces as well as hosting new clients.

Whether playing in bands during high school and college or shaping a broad professional career, music has always navigated the map for George. “I’ve spent several years melding my favorite influences to create the right sound for me,” he explains. Enthralled ever since first strumming a guitar, the songwriter has harnessed his eclectic tastes to develop a view and style all his own.

Passing over a recording offer to study music and journalism, George went on to earn a B.A. in English. Rejection letters from Nashville and unemployment later drove the musician to Texas, where a winding job path unpredictably led to successful management positions in healthcare and information technology operations. Though he had gained a lot of valuable life lessons, he had not yet established a clear direction.

Landing at rock bottom after an emotional breakup, during which time even guitars were abandoned, George found himself immersed in a spiritual retreat. The encounter changed his life forever. “It was fantastic,” he enthuses. “Not only was I renewed, but I also realized that God created my gifts and talents for a reason.” Emerging with a brilliant zeal for life, the once and future artist revived his lifelong dream, but with a greater interest in mind: “I can reach people and help them discover a fresh attitude by making music that elevates the spirit and celebrates life.

George furthered ambition by building his own project recording studio, where writing and experimenting with instrumentation consumed much of his spare time. Subsequently, his job was eliminated due to downsizing. The musician’s decision to enter into production full time called for a practical need for his management and business background. “Change is inevitable,” he muses. “All we can do is embrace it and attempt to make progress.

Working under his own label, the composer proceeded with a simple philosophy rooted in his core principles and values: “Make music straight from the heart, music I like and can feel proud to share.” The transition was both educational and exciting. Never aspiring to concert tours or live performance, the artist called forth his creative energy in the studio, producing a spirited introspective debut album that opened to remarkable reviews and radio airplay across the United States and Canada, and eventually around the globe.

“I didn’t want to follow the typical path as a regular performer. Instead, I wanted to chart my own course – very much like me to make life more intriguing rather than ordinary!” He segued by contributing original material in a feature-length independent movie highlighting new instrumental guitar sensibilities as well as selected tracks from the debut CD. Teaming up with the director for the underscore was such a thrill that George realized the broader potential in film and television: “Once I saw what fun this could be, I knew that motion pictures was right for me.

Although he freely shares great memories, it’s not his preference to look back. “It’s kind of interesting to reprise familiar material, but that’s not as interesting to me personally as dreaming up new themes or concepts. It’s the kind of thing that gets better with time, because intrinsically there are a lot of things one picks up and learns.” Not only writing music, the composer explains, but the correlation between music and pictures. “The process is intense, but fascinating – not to mention incredibly creative – and collaborating is inspiring.

He continues to reshape his musical landscape while pursuing various ambitious endeavors, including subsequent album releases, composing a guitar concerto, and producing multimedia projects in addition to revisiting his literary and social criticism interests. “I’m taking my career and creativity and building them around my vision, to the point where I can be successful financially and gratified artistically and do what I do best, which is associate art and music.”

As his comments make clear, it’s the work – and the myriad of personal, musical and technical stimulus it brings – that drives him. “Naturally, I want to reach more people. That’s what I’ve always intended even though it may not seem that way.”

These life changing events have instilled a certain wisdom and insight in George that give him a unique ability to empathize with people through song and melody. His distinctive voice and natural flowing performances evoke a familiar sense of imagery and storytelling, relating personal tales that both depict obstacles in life and reveal hope for overcoming defeat. Drawing on existing ideas as well as completely new material to develop each project, George transcends form and breathes his own universality.

Not surprisingly, he is a strong proponent for art as social and moral action. An evolving and deepening sense of spirituality and community underlies much of the wordsmith’s artistic content, sometimes singing for change, often mystic or contemplative, always accessible. There are no rules and trends don’t matter. “I think my lyrics are clear and understandable,” he says. “Something everyone can relate to, especially in light of the daily stresses and current affairs in the world.”

The music connects because he is asking questions that all human beings should ask as they look outside of themselves. Amazingly enthusiastic about his beliefs, the singer voices values, behaviors and attitudes that form a healthy and productive way of life. “I’m not perfect and I don’t claim to be better than anyone else,” he says, “but I’m doing what I think is right and that’s part of my music.”

Acting on good intentions by taking the initiative to carry through with challenging ideas is important to George, as well as supporting civil and charitable causes. Accordingly, he is spearheading the Vertical Leap Challenge, an initiative to produce socially relevant and impactful concepts that entertain, educate and benefit others. “Don’t just sit there, do something!” he professes. “Elevate and Celebrate through personal improvement and community involvement.”

When he’s not participating in favorite diversions, the guitarist is in the studio composing and recording. Always a good listener as well as a player who is willing to share his perspective, George also turns his attention to fellow artists by collaborating in the studio as producer and sound engineer. “You must take the first step to learn about new things, be open and inviting to new experiences and realize that divergent influences bring a vibrant quality to life,” he suggests.

Despite various distractions along the way, George has stayed true to his vision, upholding the express purpose which animates his music: “Vertical Leap is a deliberate effort to use my life to explore the stories of the past and the mysteries of the present – in the end, sharing a real desire to touch the divine. It’s my view,” he asserts, “but it’s not just about me.” The point is to raise awareness and encourage listeners to look into the worldview and inspiration that guides their own lives.

Ultimately, his conviction speaks for itself. With melodies as honest, passionate and uplifting as his life has been, the artist’s music not only delivers a message but also entertains the audience and makes it clear that with George in the studio, there are many more good times to come. As the new millennium progresses, he is as busy as ever with various arts projects, film licensing and scoring opportunities and producing other artists in the studio. 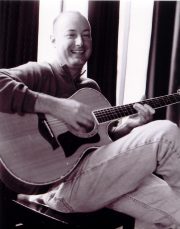